Private Messaging Have questions about the messaging functions?  Ask here.

1 Not having noticed this section before, I tried to use the private messaging to send a bug report to you, Pixy Misa.

The software says that I sent four messages. Also, when I click to see the body of the messages, the From: field reads Pixy Misa.

3 Thanks for pointing that out.  The problem was that the messaging system looks up your site so that it can display (if you want it to) that the message came from Sam Carter of stargate.mee.nu.  I have four sites on the system (mee.nu, mu.nu, ai.mee.nu, and a site I'm in the process of setting up for someone) so it found all four and ended up returning four items for each actual message.

SQL can get quite complicated in situations like that, particularly with MySQL which has some annoying limitations on subqueries.  But I've modified it to only return the first of your sites, and so not duplicate messages unnecessarily.

Now I'm just setting it up to have a flag for when you have new messages, which is necessary for it to be really useful.


I have a screenshot at http://patbuckman.mee.nu/files/error1.JPG

5 I'm figuring more of this out. 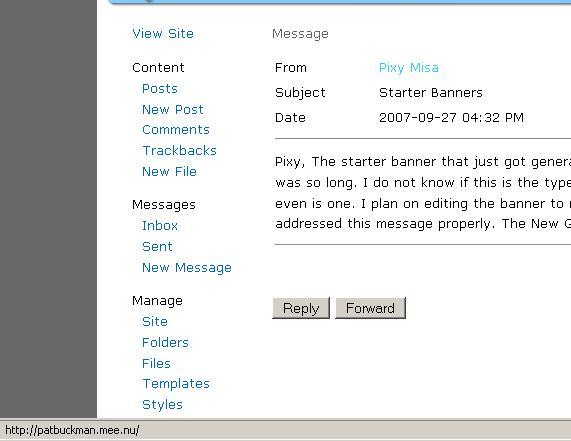 I am still learning the oddities of the comment editor.

6 Thanks, I'll get that bug fixed too.  I think you're the first person who's noticed that private messages exist.

7 Fixed that one too.  It was what I expected - I just had a to where I should have had a from.

8 You are very welcome. Looks all fixed now. Thank you.
Probably the only reason I noticed early is because I was expecting a bug report function as part of the site management screen.
Then I remembered something I'd thought I read about mee.nu sites including a free email, and confused the two with the PM function.

9 I was trying to PM Steven den Beste, and guessing at the username. It kept on saying user not found, until I similtaniously put in chizumatic.mee.nu and filed in the subject, for the first time, with 'error'. I got the following error message:

10 Hmm.  You can specify the site instead of the username, so that should work.  I'll do some testing.

Private messages aren't ideal just yet, as they don't notify you when they arrive.  That's fixed in the new version, which is currently under test, and should be in place next week.

I guess just entering the site as the recipient still isn't working. I did the same thing that Pat did, just enter the site URL, and got a bunch of nasty red text.

13 I'm trying to send a PM to Avatar_exADV, and I get the previous error message whether I use "Avatar_exADV" or avatar.mee.nu as the recepient.